The Story Behind the Story

The Story Behind the Story 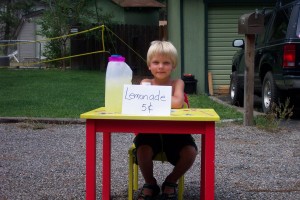 Once upon a Tahoe summer day my seven-year-old son set up a lemonade stand in our front yard. It was so hot the birds had stopped singing and the dogs had stopped barking; our neighborhood was quiet, still, and empty. Caleb sat happily pouring lemonade into Dixie cups, waiting for customers, but no one ever came.

Deciding to be his first customer, I stepped on to the front porch with coins in hand. At that very moment my son, frozen in his chair, started pointing and stuttering “bear, bear, bear” as a big black bear came walking right down the middle of our street. I started yelling “get in the house, get in the house, get in the house”. He ran to me, I grabbed his hand, and we stood on our front porch watching in awe as the bear sauntered about 10 feet in front of the lemonade stand, headed directly to the neighbor’s yard, yanked a bird feeder from a tree and sat down  to enjoy a snack. Our dog slept through the whole thing, laying in the dirt, right next to the lemonade stand.

About a week later we were walking our dog through the neighborhood and she abruptly started barking, growling, and tugging on the leash. We looked over and saw a coyote standing near a tree eating trash that had been thrown into an empty lot.

Later that same summer we went to the beach with some friends to picnic and to play. Some Canada geese came up begging for food and Caleb chased them away. A lady who was a complete stranger got up off of her beach towel and walked all the way down the beach and yelled at Caleb  for “being mean to the geese”. She ranted and raved and yelled that my son should get off the beach for being mean and then she finally walked away. I stood there in shock, not knowing how to respond, and said nothing to defend my son.  As we left the beach a couple of hours later, there she was, feeding Cheetos to the geese and taking pictures. I still didn’t say anything but my friend went up to her and politely explained that she was actually the one being mean by feeding human food to the geese.

I still look back on that long-ago summer – my son is now a young adult- wishing I had said something to that lady on the beach. Instead, those experiences motivated me to write a song for kids that summer, to teach them proper interaction with wildlife. In The Meadow (Don’t Feed Our Bears) tells a true story about the interactions we had one summer with a bear, a coyote, and some geese at the beach.  Over the years, my song evolved into a recording and eventually an illustrated sing-along story with beautiful watercolor illustrations by my husband’s Aunt Lois.

And that is the story behind the story of In The Meadow (Don’t Feed Our Bears).

Like many parts of our country, Tahoe is a wildland-urban interface, and wildlife encounters are inevitable. Wild animals are our neighbors but they naturally fear humans and will avoid interaction with us only if they remain fully wild. Giving wild animals access to human food -whether it is garbage carelessly thrown on the ground or deliberately feeding Cheetos to the geese – causes them to lose their fear of humans and that is when conflicts  arise. Once a bear is labeled a nuisance it’s life is endangered, hence the slogan “a fed bear is a dead bear”. The Tahoe Bear League  http://www.savebears.org/ does a great job educating people about living in harmony with bears.

To hear and see the first verse of “In The Meadow (Don’t Feed Our Bears)” click on the “Songs & Stories” tab.